The heart is such a marvellous system of study from a mathematical point of view because it exhibits all the features which fascinate those interested in the science of collective phenomena. It is out of equilibrium, highly non-linear, ionic signalling induces mechanical responses and it can be studied as an ensemble of discrete and stochastic elements which can be “renormalised” to obtain reaction-diffusion deterministic descriptions of the cell and even tissues!

Beyond mathematical reasons, it is obvious that if we understand the mechanisms driving the state of cardiac myocytes, it is more likely we can develop solutions for pathologies which put health at peril. E.g. by shedding light on routes to more specific drug development or non-invasive procedures to correct chronic anomalies.

As a member of the applied physics department of UPC (Barcelona) I collaborated in the developmnet of a mathematical model of human atrial cells recently published and entitled:

Are SR Ca content fluctuations or SR refractoriness the key to atrial cardiac alternans?: insights from a human atrial model.

The model is pretty detailed, it employs several expressions for pumps and currents developed by Nygren et al, and Courtemanche et al., but reformulates the calcium release mechanism in order to study the hypothesis of arrhythmogenesis induced by refractoriness variability in the calcium release units.

The above means that the calcium release units physically associated with ryanodine receptors can be mathematically treated as excitable media which undergo transitions between states, such as active/inactive in which the recovery time $\tau_{rec}$ is the reciprocal number to the rate of occurrence one of such transitions. 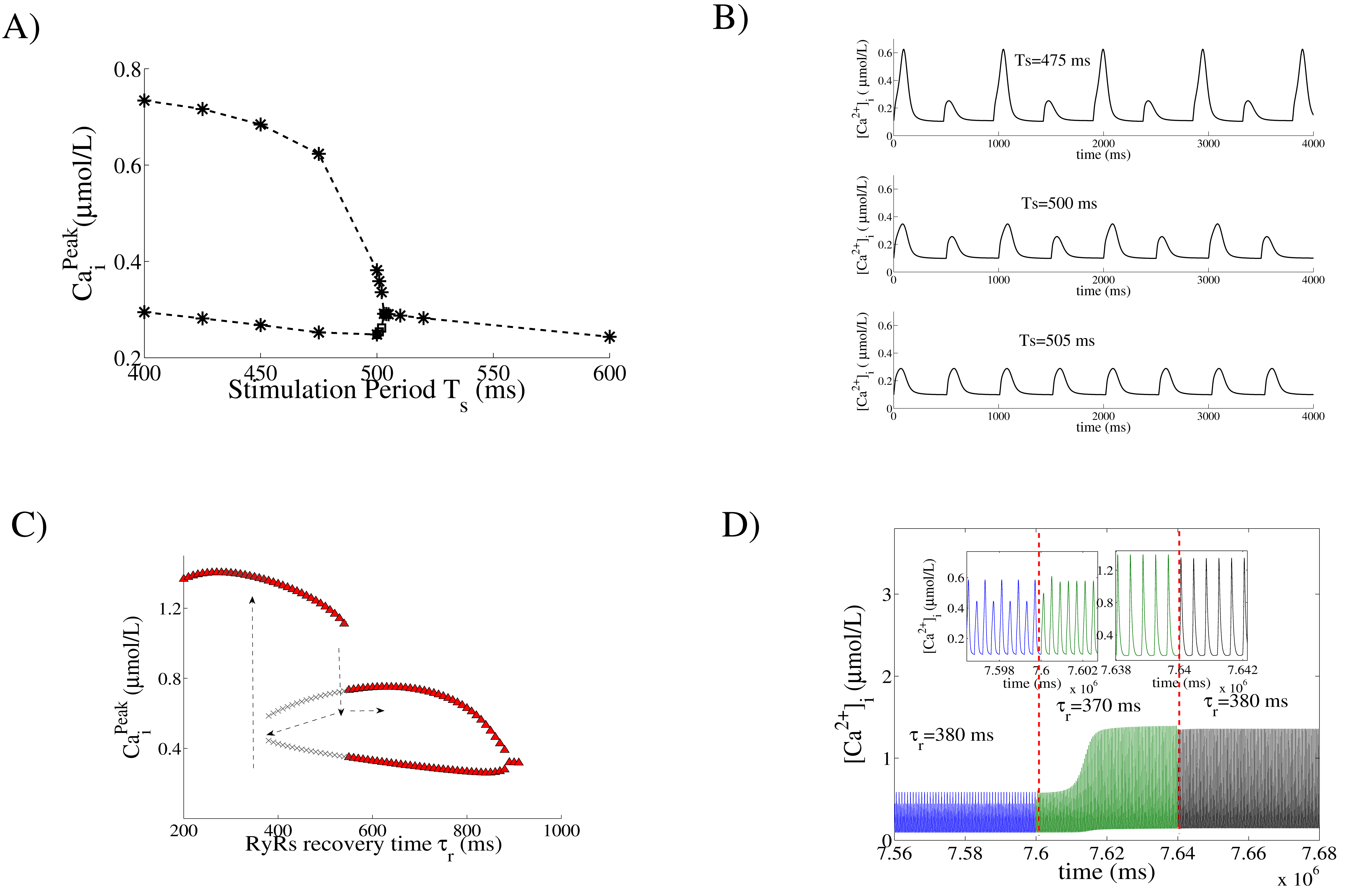 Some results obtained from varying the refractoriness: Bifurcations, Alternans, Hysteresis.

These RyRs stochastic dynamics constitute the dynamical aspect which interests me the most. Hopefully I will post about that soon, basically they can be described by Master Equations which can be treated analytically by perturbation analysis, Floquet theory and all the machinery of non-linear science, which makes the entire class of systems a very rich and active field.

That is all for now, I assume you have visited the UPC cardiac dynamics site, if not, here is the link again. If you want to start a PhD or are thinking of a postdoc, check it out, they are pretty good and on top of that it is located in the mighty city of Barcelona! Finally, let me just link you all (assuming someone reads this) to the model’s source code and project page, as well as to a great site about virtual hearts maintained Liz Cherry and Flavio Fenton.

« Previous: Setting up the site Next: Calcium dynamics in atrial tissues »